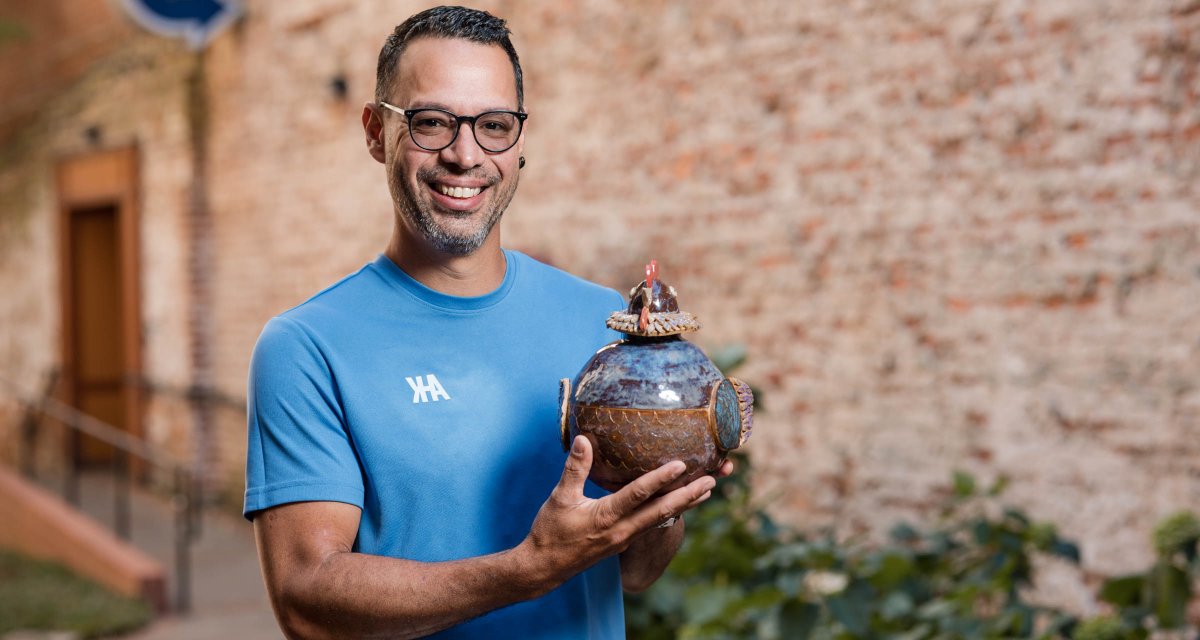 José Calabres is a creator–ceramicist, sculptor, and filmmaker–and a survivor. Growing up under his father, Pepe Calabres, an artist who has more than 150 exhibitions in galleries like the United Nations and the Vatican, José was always surrounded by art. Through many hardships, José has never ceased to keep creating, garnering a string of accomplishments like composing the official theme for his national soccer team, producing a national podcast, and recently winning an Emmy award for Best Writer and a NYC Telly Award in 2020 for Best SM Show Production Team, where he was editor.

As a journalist in Venezuela, José spoke out against the government, which caused his family to be violently raided and threatened. José had to stop writing, and he and his family were forced to leave everything behind and start over. His father–who he had never been separated from–was forced to flee as well; but because he did not have an American visa, he went to Chile.

In 2015, José and his family uprooted their lives to start again in Knoxville. He and his wife cleaned local stores and worked in restaurants and warehouses. Then, José began working for a TV station, eventually working up to production assistant, editor, and once again, producer. These days, he is staying busy with scriptwriting, various artistic endeavors for Knoxville HandMade Arts, and managing his successful tree service business, JC Tree Solutions.

“We want to thank Knoxville and its people for the hospitality they have given us, the affection with which they treat us and the kindness of their people. We feel at home, safe and loved. We have a lot to be thankful for and give to this city.” 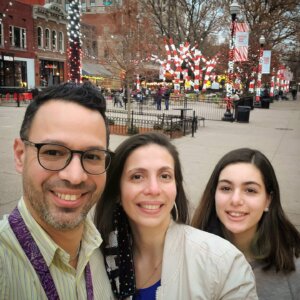 My name is José Calabres. I am the son of Pepe Calabres and Grace Rojas.

My parents are potters. I don’t remember a moment in my life when I haven’t been surrounded by art, paintings, pottery and books.

At the age of 6 I began to study music and dedicated myself to playing the violin for about two scholarships. At 16, I had already played with several of the most important symphony orchestras in my country (Venezuela) and was a founding member of the national system of orchestras known worldwide as “EL SISTEMA” as a teacher.

I studied music at the University Institute of Musical Studies in Caracas, where I specialized in Instrumental Performance and Ethnomusicology. At the same time I studied Literature at the Central University of Venezuela.

After completing my studies in Caracas, I returned to Trujillo, my hometown, where I began to study Education at the Universidad de los Andes. It was here that I founded the Ska band YERBABUENA LATIN SKA, in which I was the vocal leader and composer. A short time later, I managed to have a certain level of success at the national level and was invited by the National Soccer Federation of Venezuela to compose the official theme of the national soccer team.

After this success, I was invited one day to an interview on a radio show, and that’s when the host of the show invited me to do the show with her on a regular basis. That was my start on a path I didn’t expect to take!

Over time, I became a producer and host of the show on a national radio network. In that show, a Telemundo producer heard my voice and invited me to do voice over for a renowned Telemundo Miami show, and so I began to be a voice talent.

I have worked as a producer and editor for television companies in Germany, USA, and a dozen other channels in Venezuela.

But I have never left aside the world of art. Since 2007 I have been working with my father as an art and theater producer. We founded the only institution on the continent dedicated to teaching the art of Bodypaint in an institutional manner, the Latin American Academy of Body Art, and we participated in 3 bodyart world championships as representatives of Venezuela. We have been recognized as pioneers of body art in Latin America, introducing it in theatrical artistic performances in the openings of my father’s sculpture exhibitions since approximately 1990, when the concept of body paint and body art did not even exist.

Because of my work in the media, I developed a blog in 2007 where I published opinion articles. In them, numerous times I criticized the policies of the Venezuelan government, which was becoming more and more corrupt and dictatorial. Unfortunately, this led to the government of my country perceiving me as a public threat and pointing me out as an enemy. In 2011 I was threatened by the regime’s police to stop publishing. They made sure that my 4-year-old daughter would be kidnapped and disappeared if she continued to write. Obviously I stopped doing it.

Then in 2014, during the national protests against the dictatorship, where more than 11 million Venezuelans marched in the streets demanding the regime’s departure, more than 200 people were shot to the head by regime snipers. They began to look for what they called “traitor rebels” everywhere. My family and I were immediately identified as conspirators and were kidnapped from our store, beaten and threatened with death. They stole our computers, cameras and money. In 2015, a group of police officers tried to kill us by machine-gunning our house, which was destroyed. That same night we had to flee from home, from the town and shortly after, from the country.

We arrived in the USA in 2015. My wife, my daughter and I. My mother, a US citizen, had lived in Knoxville for over 12 years, so we came to Knoxville.

We left behind everything we had. Our business, our house, my father, my wife’s family. Like millions of other immigrants, our entire life was lost defending freedom against a criminal regime, and now everything we had could fit in a carry on.

My father, an artist with more than 150 exhibitions in the most important galleries in the world, whose works are part of such important collections as those of the World Bank, the United Nations and the Vatican, also had to flee, but because he did not have an American visa, he had to go south, to Chile. We would spend 6 years without seeing each other again since that night. We had never been separated.

In Knoxville I would spend several years with my wife cleaning a store in order to survive. I eventually managed to get a job on a TV channel, but not as a producer, but as an employee in the warehouse. However, months after starting, I worked my way up to Production Assistant, and finally Producer.

I worked cleaning that store from 6 am to 9 am and then from 7 pm to 9 pm from Monday to Saturday. When I left there, I went to my job at the TV channel from Monday to Friday. In the evenings, when I got home, I would try to work a little pottery at the kitchen table. It was the only place he had to do it. Our house was very small.

But life and work have been kind to us, and after much effort, we were recently able to buy a house. Now I have a little more space and I have my own studio. It’s small, but better than a kitchen table. My father is finally with me again and now we work, once again, together. I no longer work cleaning that store, and I don’t work with that TV channel anymore. I started my own Tree Services company, but I dedicate myself to art and as much as I can.

We are trying to start again to build our path as artists. It is not easy in a country where we are not known, but little by little and with work we are sure that we will be able to grow. We already did it once, and surely we can do it one more time.

Knoxville Handmade Arts is also a tribute to this city. We want to thank Knoxville and its people for the hospitality they have given us, the affection with which they treat us and the kindness of their people. We feel at home, safe and loved. We have a lot to be thankful for and give to this city. 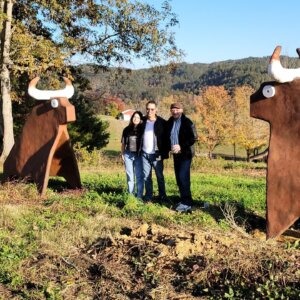 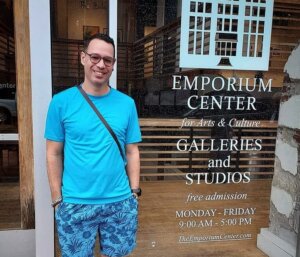 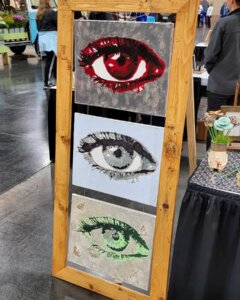 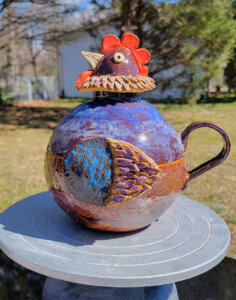 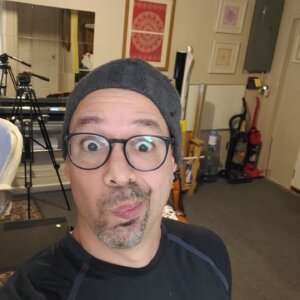 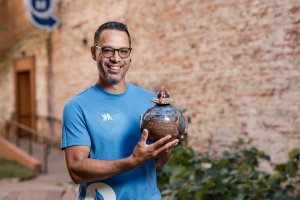